Thousands of Facebook users wake up finding themselves in Facebook jail.  And the words  “you are blocked from using Facebook for 3 to 7 days”.  After the initial shock, you become frustrated as there is no one you can speak to about it.  Was it Facebook who was offended with your post, or did an individual report it?  Facebook unlike any other business, can not be reached by phone or email.  All messages are automated.   There is no real appeal process and for many people like myself we are locked out from contacting friends in other countries and the groups that we manage.  For me, I am a very active member of our local homeless groups,  as well as “Parents against Violent crimes”, and a speaker at the The National Day of Action on the Overdose Crisis.  A ban of 7 days is devastating as there is an event planned for this week involving the homeless and I am unable to approve new members or communicate with anyone in the group.   My frustration level is very high as I can not understand why I am being targeted, and how an individual can continually report my posts and images. I am fully supportive of Facebook removing individuals who are promoting violence, bullying, enticing children or human trafficking.    These are the subjects that should be reported to Facebook.  I want Facebook to review my 7 day ban, and find out who is reporting all my posts.  It is critical that I have access to my groups where I am an admin. 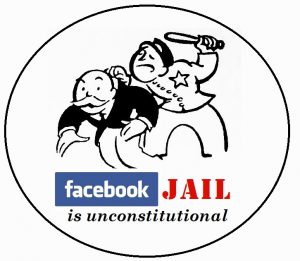 After extensive chats on other social media platforms I have learned that the 3 – 7 day bans are not just for individuals.  There are thousands of companies that are finding that they are being penalised and being suspended.  Facebook responded to one group:

So why is it so hard for patients, and advocates to be able to advocate and have discussions?  Now that Instagram is owned by Facebook they have full control over two social media platforms.  They control the conversations and can give you lifetime bans.

Facebook has an arbitrary, subjective, discriminatory and archaic policy and their policy does not apply to all,” the petition is quoted as saying.  “It is just random.  Or at least it appears to be random.  There is no way for an individual or a business to contact anyone within Facebook to get assistance.

Apart from the positive benefits, Facebook and other social media platforms have become a cesspool for spammers, hackers, kidnappers and other people who are using these platforms to spam and scam individuals.  They use these platforms for criminal activity.  I understand that Facebook takes their responsibility seriously to keep their users safe.   If someone violates their policies, or their community standards, he/she will be blocked for a period of 3 or 7 days.  And for those posting violent images, bullying, selling opioids etc should be banned or removed permanently.  I agree as we need a safe online community.

On the other hand there are people who take great pleasure in reporting friends, family members, or if they are a competitor in the same business.  These types of reports must be looked at manually and I believe that a persons reputation online should be taken into account before a ban is put in place.

The largest number of people who are being targeted appear to be in the Cannabis industry. This industry includes: advocates, educators and patients. For those who are patients or are advocating for them, the stigma on Facebook is strong.  Many people in Canada were excited that it was finally legalised but they are still being penalised and feel like they have lost their freedom of speech.   After reading the rules that they set for community standards below.  Many Canadians are confused as  “Cannabis is legal in Canada and you can get a prescription for it”

There are literally thousands of support groups on Facebook who give advice on how to grow Cannabis right through to how to harvest and how to make their own edibles.  These groups are lifelines for those who use Cannabis for medical purposes.  There are also thousands of images of plants, edibles, people smoking bongs etc.  But the image below was reported? 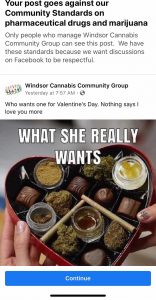 Now this post is not selling anything, and this particular image can be found in thousands of Google searches.  The group was set up for local cannabis patients who wanted to be able to network together.  The words “Who wants one is not selling”.  For people who use it either medically or recreationally (which is legal in Canada) have responded  to this image with “who wouldn’t” “wish it was possible” “now that is a gift”

The following 2 images triggered yet another ban which was for a Valentine card that had been shared by thousands of individuals and in a  number of groups.  I was reported for this because of the card below.  Yet earlier, Facebook posted this on my wall to ask if I wanted to boost the post?  So I can boost it and pay them, but yet I was banned for posting it? 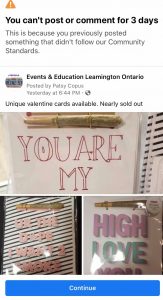 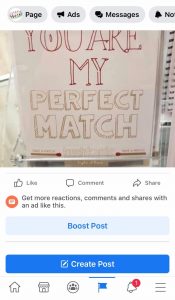 For this post, if Facebook had looked at my profile, they would know WHAT  I was delivering.  I am an advocate for the Homeless and an Admin for our local Homeless group.  I buy and distribute socks, hand warmers and toiletries for the homeless and distribute them at the Downtown Mission in Windsor Ontario.  I also visit regulars and just sit and talk to them.  Once a month I deliver a birthday cake and give everyone a piece.  For many, their birthdays are not celebrated and they are so thankful for this gesture.  The people who attend the mission are there for meals, to get clothing or other services the mission supplies.  Many of them suffer with serious opioid problems.  They share their stories with me, and  they are heartbreaking.  In my post I am suggesting that there are more plant based solutions for them.  We have local clinics who are weaning addicts off of opioids using Cannabis. They have read the research in all parts of the world and agree that it is a viable solution. 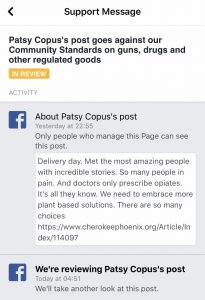 I am not only an advocate of the homeless, I take my grandchildren with me to the mission so they can see what it is like for the homeless and the growing number of people who are living below the poverty line.  My question to Facebook is:  Why me?  What did I do to get a 3 day ban and now a 7 day ban?  I am not alone.  I have friends in the Cannabis community who have had to make alternative accounts of Facebook so they can still run their groups as they are banned on numerous occasions.  This is frowned upon by Facebook but they leave some of these people with no choice.  And for others, they use a different name to protect their identity from people they work with, or because of bullying or domestic violence.  We have become victims of unfair bans, and this needs to stop.

If you are a Cannabis advocate, patient or educator and received unfair bans from Facebook I would like to hear from you.