Solutions for Homelessness in Windsor

Just look around your city and what do you see? My city is Windsor, Ontario on the border to Detroit Michigan.  All I see is boarded up businesses, graffiti on doors and windows, needles thrown away in parks or allies.    Windsor once boasted to be the Automotive Capital of the World has been devastated by the pandemic.  As I drive downtown, all I see are homeless, garbage in the streets and an overall sadness.  It is difficult to sleep or live comfortably knowing that there are hundreds of people who have no home.  They depend on the largest shelter in Windsor called the Downtown Mission

A bad month won’t make you homeless.  Homelessness is the product of a perfect storm 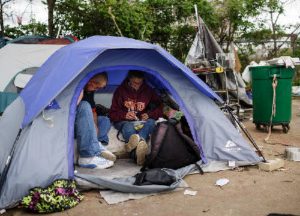 the many faces of the homelessness

Aren’t we all just one bad day away from being homeless or jailed.  It starts with becoming unemployed, then becoming unemployable.  Domestic abuse, add a drug or drinking problem to drown out the realities of life, throw in a divorce, death then depression and anxiety.  And what about those who became disabled at work and their doctors get them hooked on opioids.

How long would it take you to be homeless?  Most people say 3 months of tapping away on all your available credit, using home equity and loans.  It could take 12-18 months for you to lose your home to the bank.  It is shocking to see the number of people who try to keep up appearances.  Because if relatives or friends knew about their financial situation, they would pity them.

Unfortunately we live in a society that values money over life and tend to look down on anyone who is poor.  But what happens in a natural disaster?  The Salvation Army jumps in and provides tents, shelter, aid, food and all kinds of help.

I read this article and it is so true, and stands to prove that we are only valued by our money:

A couple living in a $60,000 Airstream trailer are “full-time RVers” because they HAVE MONEY. A couple in a 30-year-old RV with the same lifestyle, but no jobs, NO MONEY are “homeless.”

The homeless don’t have the luxury of appearing to have money. They’ve lost their “mask” and are naked and exposed of being something worse than people without a home. They’re people without money.

When you don’t have money people assume you are lazy, undisciplined, evil, corrupt, manipulative, an addict or alcoholic and irresponsible – all traits I see quite frequently in the wealthy and middle class.

The bottom line is that it’s not really homelessness we look down on, but the poverty that accompanies homelessness. It’s that poverty that people hate. Some people think it’s unspiritual to have money. Others believe its unspiritual NOT to have money. Americans tend to fall mostly on the side of NOT having money as being unspiritual, blessed or worthy – except for Christians, who are the most screwed up when it comes to money.

Because most Americans don’t realize the people they see on the street, begging, drunk, mentally ill and addicted represent only 15–20% of the homeless population, they assume all homeless people are like the minority of homeless, yet 80% of homeless people do have jobs, sometimes several jobs, and they live with friends, couch surf or live in their cars and no one is the wiser so they don’t look down on them.

If you are housed, but poor, and your poverty shows, you are looked down on as well. It’s not about where we live. Tiny House dwellers live in the same amount of space as homeless people, but because they have money, it’s a lifestyle.

If you are an eccentric millionaire who dresses and lives like a homeless man, but who is known to HAVE MONEY, you are not looked down on. You are considered weird and eccentric, but money generally protects you as long as you can prove you have it.

In this city, many homeless are housed in hotels.  I often wonder if the rent for these hotels was used as a subsidy for rental if more people would be permanently housed.  There is a housing plan in place, but I can’t see how this is going to be met at the current rate of homelessness.  Every day I research solutions for low income housing.  This link is from the USA but I am sure we could use some of the information that they have provided.  This affordable housing solution website is for Ontario

Providing the city can use some of their vacant land there has always been the tiny home solution. The Homeless hub has a website about tiny homes
Victoria B.C. is considering a tiny house project to shelter the homeless which appears to be very forward thinking for the city.  I am wondering why the City of Windsor would not consider this as well.

I feel that the taxpayers in the City of Windsor should be able to provide input and get answers about solutions for homelessness in this city as well as finding solutions for those who suffer with Mental illness and or drug addiction who are harder to find housing for.  How do we arrange for a public forum to help make Windsor great again.