Justice for victims of crime

I am writing this as an open letter to the Windsor Star and to the Department of Justice who said they were transforming the criminal justice system in 2017.  To date, there has not been any changes.  On Wednesday, September 23rd, 2020 there will be a candlelight vigil held for the victims of crime organized by Carolyn Crankshaw (mother of Darrion Moffatt) and Lisa Valente (a local advocate).  It is the 3rd annual Justice for the victims of crime event, and the list has grown since last year.  It is a very emotional evening for many of the families who will attend who share their stories.  The purpose of the vigil is to bring attention to the lack of justice in the justice system.

Taking a life should equate to being incarcerated for life, a real life sentence.  Many people are waiting to hear what the sentence will be for the brutal beating and subsequent death of Sara Widholm.  How can you justify a 3-4 year sentence.  The accused has more rights than the victim.

Timeline for convictions of accused in Canada

Where are the harsh sentences for the people who were murdered in Windsor?

An article written last year in the National Post on the topic of the Quebec mosque shooter.  The sentencing judge was quoted as saying a lifetime in prison was “totally incompatible with human dignity”  “Where is the dignity for the victims of the crimes” says every victims family.  According to the article, every life is equal to 6.5 years and it equates to 510 years of human life.  The Quebec Superior Court Justice rewrote part of the Criminal Code to be able to hand out a 40 year sentence.  Life should mean life.  A judge should not rule that a sentence is “cruel and unusual” punishment

Victims families no longer have a voice, the only voice they have is when they fill out a Victim Impact Statement which is  read in court.  But for many, because of the Covid pandemic, victims families are not being updated on upcoming trials or bail hearings and they are NOT allowed to attend.  They are being further victimized by the very system that was put in place to see justice being served.

It’s every parents worst nightmare.  Their child goes missing and they get “that” phone call, or a knock on the door.  In front of them stands a police officer who has been given the job to tell them that their child has been murdered.  The first response of shock and numbness turns to anger years later, when the accused goes to trial.  The sentences don’t fit the crime. 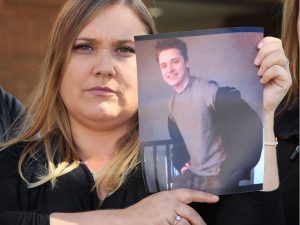 Still waiting for justice for the murder of her son

Darrion Moffatt was only 18 years old when he was shot by Cody Kennedy 19 and Raul Huezo 18.   The date September 8th, 2018 is the day that his mother Carolyn Crankshaw remembers well.  Days later Darrion was removed from life support and his mother Carolyn decided that other lives could be saved through donating his organs.  Five people benefitted from this donation.  Carolyn is looking for answers, and to date she has not had any answered as she waits for the trial to begin.  In the meantime, the co accused (Cody Kennedy) had his charges dropped.   Fast forward to 2020.  Because of Covid, the other suspect has been allowed to go home to await trial This has triggered additional anxiety for his mother and the rest of the family.  The justification for release was from judges who describe jails in their bail and sentencing rulings as “dangerous” places to be.

The list below vary in age from small children, to adults.  Sadly the list grows every year.

19.  Sara Anne Widholm  75 years old !!!  Brutally beaten by a 21 year old male on Ganatchio Trail in 2017 and died 14 months later due to her injuries.  In a newspaper article, a doctor publicly described the damage as the worst he had seen by an assault in his 12 years working in Windsor.  The trial is ongoing in Chatham Ontario and a verdict is imminent.

20.  Kamia Barry (victim of a Drunk Driver)  – 40 years old, father of 2 children.  It took three months for a woman to be charged with impaired driving causing death.

Please dont forget about these individuals.  It could be your son, daughter or grandchild.  We need stiffer sentences for those convicted of Murder. The victims may no longer have a voice, but their families will make sure their voices are heard.

We need justice for victims of crime