Outbreak at shelters for the homeless in Windsor 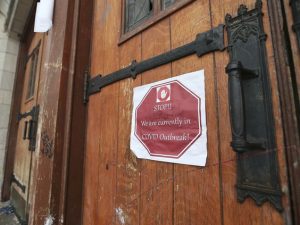 The Windsor-Essex County Health Unit declared an outbreak at the mission on Feb. 11. In total, 70 guests and staff members have so far tested positive for COVID-19.

The homeless in Windsor have been very fortunate to dodge Covid 19 for a whole year.  But it was just a matter of time as schools and long term care units continued to see new active cases and hospitals.  But February 11th, Covid decided to rear its ugly head and infected both the Downtown Mission and the Salvation Army which were ordered to close by the Health Department.  Ron Dunn, Executive Director of the mission went into emergency mode as it became a very desperate situation with a snow storm brewing and no place to house all of the people who would normally sleep at the 875 Ouellette location.  A call for help to local homeless advocates through a Facebook group called Angels for the Homeless brought many volunteers in to clean and disinfect the old library that is currently vacant.  They spent hours cleaning floors, disinfecting all surfaces and making beds  It was done in just a few short hours as the homeless started to line up at 9:00 pm in a nasty snowstorm and they were eager to get in from the cold.  Ron Dunn and the volunteers had all the beds ready, and even a make shift movie area and hot coffee and hot chocolate generously provided by Tim Hortons. 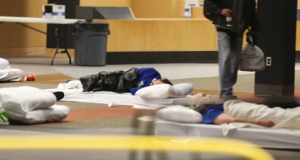 Homeless sleeping at the old Library because of outbreak

Dr. Ahmed was quoted as saying :

“Despite the size of the mission’s COVID-19 outbreak, Ahmed had no harsh words for the charitable organization’s leadership team, instead insisting that any COVID-19 outbreak is a “very demanding, challenging, and resource-intensive process to get under control.”

There are several outbreaks at shelters across the Province which are very difficult to manage.  The difficulty is helping those with Mental Health issues and addiction.  They can not be locked up in a hotel without access to their drugs.  And because most vital programs to support Mental Health and Addiction have been closed due to Covid19 there are many who are not getting the help they need.

Friday February 26th, 2021 – a new plan had to be made as the City of Windsor’s Isolation and Recovery Centre was full and the Downtown Mission was left scrambling to find more space for those who have tested positive.  City and frontline Downtown Mission staff working with community partners had to relocate residents of the Downton Mission again.  The  Mission and Salvation Army were hit hard but there are also migrant workers who are being housed in this area for quarantine purposes.  The City of Windsor website stated that there were 35 people at the Aquatic Centre, 40 isolating in Isolation and Recovery Centres (IRC1) and 35 people isolating at IRC2 location.

Many homeless were turned away by city workers at the Aquatic Centre, leaving them with no place to sleep.  These people  are the most vulnerable, including women.  How can we let this happen?  Yes, we have an outbreak and the city has set up a day program at Water world, but those people are moved to hotels for the night.  The city has to understand that people become homeless daily.  They may have been “couch surfing” but over stayed their welcome, or living in cars or kicked out of where they live.  They are not on “lists”  I phoned 211 and 311 to tried to get help for people I saw wandering outside.   I gave out my last 4 sleeping bags last week that were donated to the Angels for the Homeless group.  But sleeping outside should not be the only option.  The only person who seems to be available out of “office hours” is  Ron Dunn who runs the Windsor Downtown mission.  There is obviously a huge gap during this outbreak on where the “other people on lists are supposed to go”

The mission plans to keep the plaza and build onto it, creating a 40,000-square-foot operation to house the functions it currently has operating out of a church at 664 Victoria Ave. (commercial kitchen, dining area, multiple programs and administrative functions), a former office building at 875 Ouellette Ave. (103 emergency shelter beds), and a building at 842 Dufferin Place. All these buildings have been or are in the process of being sold. Also conditionally sold is a vacant property on Ouellette and Elliott Street which had been the future site of the mission’s new headquarters after a much-maligned $10-million plan to consolidate operations at the Windsor Public Library Central Branch collapsed earlier this year.

The new Downtown mission location is still waiting for all permissions to be made by the City.  What is taking so long?  The city can plan a new green house costing $7.2 million which will break ground in a MONTH but the growing number of homeless are still using a facility that has been used for 20 years!!  The Downtown mission is the largest shelter and offers more than just meals and a place to sleep.  They need to move as the building is sold.  The ONLY reason the city is involved right now, is because of the outbreak and being funded by the Province.

The City of Windsor and its councillors DID NOT want the new Mission to be in the Old Library on Ouellette.  Many residents wrote and said how they did not want to see it on the main street.  According to an article published by the Windsor Star Ron Dunn said:

“We heard ‘We don’t want you on Ouellette,’” Dunn said Monday. “I’ve had prominent business people call me up or come to my office and say ‘We’ll support you but not on Ouellette.’”

Ward 3 Coun. Rino Bortolin at one point this spring was so exasperated by the mission’s actions — including its flipping the library property to a private developer — that he suggested people donate elsewhere. On Monday, he said the latest move by the mission shows it’s going in the right direction.

Because of comments made by the City the Downtown Mission lost major benefactors who supported the Mission which in turn affected the services that they offered.  In the meantime the City of Windsor is presently negotiating to buy a local hotel which will be used for homeless youth as well as women with children which is needed in this city.   Apparently the council approved the purchase earlier this year.  Everyone agrees that youth and families need a safe place to sleep.

The City of Windsor will be looking for someone to run the newly acquired hotel as they do not have the resources.  Different organisations will be able to bid on this contract which will include The Salvation Army, The Womens Shelter and the Downtown Mission.  You can bet that Ron Dunn of the Downtown Mission who runs the largest shelter will not be considered, as the City of Windsor has not consulted with him about the needs of the homeless and the problems of running a shelter.

The Emergency Shelter Review is 54 pages long and talks about what is needed in this city. It talks of shelters but they are NOT equally funded.  Only two receive funds from the city.  The Downtown Mission is not funded by the City, it is supported by donations.  If the Downtown Mission had a larger facility they would have been able to control the spread of Covid19 in my humble opinion.  They were given Covid funding which was handed down by the province, but when you lose most of your staff and volunteers it makes it a very difficult task to feed the homeless and find beds for everyone.  According to the Emergency Shelter Review report:

The initial/peak phases of pandemic response should be focused on emergency protective measures and incorporating public health guidelines into services, including:
• Reconfiguring shelters to promote physical distancing, including increasing spacing between beds (two meters if possible), creating barriers between beds, staggering mealtimes, and staggering use of shared spaces and bathing facilities. When establishing new sleeping areas, each person should ideally have 4.6 square metres of space.
• Increasing infection prevention and control measures such as additional personal hygiene, using appropriate personal protective equipment, updating food handling procedures, and increasing cleaning protocols
• Training staff on safety measures
• Establishing screening and testing protocols
• Distributing disease prevention materials to shelter users
• Directing people who are unwell to testing and isolation spaces, and arranging transportation if required • Establishing new non-congregate shelter options to provide isolation spaces
• Ideally, establishing alternate non-congregate settings for older people, those with pre-existing health conditions, and options for those who would otherwise remain unsheltered
• Updating policies to reduce barriers and avoid service restrictions if at all possible
• Implementing harm reduction activities for shelter users who are isolating During the post-peak period, changes may be required to existing shelters to address capacity and other facility issues given the need to maintain public health guidelines, at least until a vaccine is available. Some shelters may require lower occupancy and/or a change in configuration of operations and services. For example, changes may be required if there are congregate sleeping arrangements that don’t allow for sufficient physical distancing, washrooms shared by numerous shelter users, or shelters that are not financially prudent at a reduced number of beds. Congregate sleeping areas put people at higher risk of COVID-19. Post-peak pandemic, the focus should again shift to reducing entries into homelessness through prevention and diversion and increasing housing-focused supports in shelters.

There is a massive void.  There are so many homeless advocates out on the streets every day handing out food and clothing.  They are residents of Windsor who answered the call for the homeless on the street and for those who are low income.  The outbreak at the shelters has been a huge eye opener for the City dealing with the homeless.  Learning how to cope with so many who suffer from addiction and mental illness.  Hotels should have been prepared properly for the homeless.  If they had met with Ron Dunn,  he would advised them of what should have been removed from the rooms and what to expect on a daily basis.  If only the public knew what is happening in isolation hotels and other hotels where families are being housed.  Many volunteer homeless advocates have seen it first hand and it is shocking.  Families with children should not have to live in the present hotels, and the news about a new hotel was good news for them.

Please write or email  Mayor Drew Dilkens and Rino Bortolini and ask them why it is taking so long to approve the new location of the Downtown Mission and put the homeless FIRST.

***UPDATE *** October 2021 – Why is it that not ONE homeless person has died of Covid in Windsor.  There is an absence of buildings that were open for showers, to go to the toilet or to even wash their hands.  Something to think about ****