The Windsor Homeless numbers are escalating and the City of Windsor thinks they will reduce the numbers by half in 4 years.  According to this article,

Cutting chronic homelessness in half by 2024 and ending it entirely by 2028 are among the ambitious goals of a 10-year Housing and Homelessness Master Plan that’s arriving as homelessness reaches disturbing depths.

There are also 6,520 renter households in danger of becoming homeless because they spend more than half their meagre incomes (less than $18,357) on rent — so any change in circumstance could put them out on the street.

The situation has worsened in the five years since the last master plan was completed, said Debbie Cercone, executive director of housing and children’s services at the City of Windsor, which manages housing and homelessness for the city and county.

Last year, a protest was held in response to the growing homeless problem.   Boxes of food and blessing bags were generously donated by the protestors and later donated to the Downtown Mission, the Women’s Shelter and Street Help. 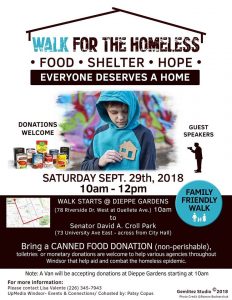 A second Homeless protest was held on February 21st, 2020 in front of City Hall.  One poster that was held by one of the protestors, drew a lot of attention as it was directed to Mayor Drew Dilkins .   For 2 years, two prominent people have slept on a bench to bring attention to the conditions that the homeless face.  Ron Dunn, the Executive director of the Windsor Downtown Mission has held a yearly event called Bench Talk and he was joined by Greg Lemay, a respected and local activist.   As it states in the article, they both knew they had warm homes to go back to and they found sleeping out one night was very hard.  They couldn’t imagine having to live outside for weeks or months. 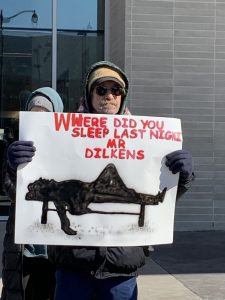 A group called Angels for the Homeless on Facebook is a group of individuals who do outreach.  In the last year they have seen an increase of people living rough or in cars.   During their outreach missions they meet individuals who are sleeping in their cars, or sleeping rough and offer them blessing bags, clothing, sleeping bags etc. I have been on several outreach rides and seen just how bad it has got in Windsor.  One person I spoke to who lives downtown,  said he is afraid to walk the streets at night.  As a person who looks for answers to a variety of issues in this city, I decided to go back in time to see what has been done in the past for the homeless.   In 2014 Drew Dilkens ran for the office of Mayor.  Here are a few comments from the article :

“It’s a huge commitment — you’ve got to be prepared for the coming four years, and it’s all hard work,” said the source. Over the course of the campaign, Dilkens “will put forward his vision and his ideas on how to bring a better quality of life for the citizens of Windsor … Drew has some incredible ideas,” he said.

Dilkens’s recent get-tough message on panhandling — he has asked administration to come up with recommendations for making the downtown a no-go zone for panhandlers — stems from his concerns over public safety, said the source.

“He works downtown, and he’s heard from people who say they don’t feel safe … he’s probably felt that way himself,” said the source. As for Dilkens’s less-than-soft diplomatic approach on some issues — for instance, when he appeared to mock advocates of urban chicken-raising in Windsor backyards — the source replied: “He’s not a 100-per-cent polished politician.”

If you ask Windsor’s mayor Drew Dilkens what his thoughts are on the homelessness crisis, he’ll say it’s “a very, very complex topic.”

During his year-end interview with CBC Windsor News Live at 6 host Arms Bumanlag, he said the province needs to step in for the city to solve the homelessness problem.

“People don’t just end up homeless one day. They get there through a process. And so addiction is obviously one of the major causes of homelessness,” said Dilkens.

“We don’t fund addictions. It’s not our role as a government to do that, but we see the problems happening here in our street.”

Did he just say that addiction is obviously one of the major causes of homelessness???   And that the Province needs to step in to solve the problem??  We have a  growing number of seniors who are no longer able to afford the cost of renting apartments or even their rising utility bills.  Young families are struggling and no longer able to afford to buy a home.  We also have individuals who are on OW or ODSP and are denied housing based on what they make.  All of these people are not addicts.  THEY are the people who pay their taxes in this city and the city is failing them.  There is a HUMAN cost every time the city changes their deadline for their Homeless plan.  We normally associate the word victims to a crime.  But the crime in this case is the city not acting fast enough on the subject of housing and the victims are the very people who pay their taxes and voted for this Mayor.  Victims of a city who can not see the pain and frustration that they feel every single day.

According to this article regarding the 2014 plan:  Fifty-two of the 63 strategies outlined in that 2014 plan have been implemented or completed, including hiring homelessness outreach workers and an innovative Housing First initiative which helps about 200 chronically homeless people quickly get housing each year.

So the question is, if they have completed 52 of the 63 strategies, then why is the largest shelter still filling to capacity and beyond. Why is there still people living under the bridges, and in their cars? Marie Morrison, 20,000 Homes Campaign director says

I would love to meet with Marie Morrison to find out more about what is being done on the streets and how the campaign will wipe out homelessness by 2024.

“We have about a $1 billion borrowing capacity of the city,” said Dilkens. “If I borrowed $1 billion and I built 3,600 units, which … basically equates to the Meadowbrook project … Likely the next day, I would probably have 3,600 new families or people who come to the city of Windsor, because they see that it might be quicker to get into social and affordable housing here.”

How many families do you have now who are on waiting lists?  What were the homeless numbers when you were first elected in 2014?

Unfortunately, with the addition of 197 people experiencing homelessness in the region in 2018 minus the people successfully housed in the last two years, the City of Windsor and its community partners are no closer in achieving its goal of achieving functional zero than it was in 2016.

A record high number of people was recorded in 2019

“The number of households accessing emergency shelter has hit a record high,” according to the report, which went to city council Monday night.

To give a full picture of the situation, the report also included statistics from the Downtown Mission, which is not funded through the Community Homelessness Prevention Initiative.

An average of 19 families or young people, 49 women, and 155 men stayed at the mission every month. The average nightly occupancy was 77 people.

Zuk said many people end up in shelters because they can’t find affordable places to live.

A total of 424 people went into social and affordable housing last year. As of Dec. 31, there were another 5,099 people on a waiting list for such units.

Ron Dunn, executive director of  Windsor Downtown mission, has seen the increase of people at the mission. Men, Women and families.

“It depends on the night and the climate, but certainly there are no bigger issues facing our city than the affordable housing crisis, the opioid crisis, and the mental health crisis,” he said.

According to this Global news article, More than half of Canadians are living within $200 per month of not being able to pay all their bills or meet their debt obligations, according to a recent Ipsos survey conducted on behalf of accounting firm MNP.

Our city has a 10 year plan, but it is not aggressive enough.  We need more affordable housing built and there is land to build.  St. Clair College reacted much faster to their lack of residences for students. A 512-student St. Clair College residence that will be erected in 45 days is the biggest construction project registered with the city so far in 2020.  The privately financed residence was green lighted last year, largely to address the soaring number of international students — 5,000 — attending the college, a phenomenon which only started a few years ago.

Why can’t the city address the homeless problem like the college has and seek privately finances/backers.