Divisiveness resolution for the homeless

Windsor is like most cities when it comes to the homeless.  But add an outbreak in the two shelters that house our most vulnerable and you see how well organised our city is when it comes to emergency planning.  As they say “If you fail to plan, you are planning to fail” Every city should have an emergency plan, be it for a natural disaster or our present situation. The Windsor Downtown Mission had a plan that they had seen from another shelter and shared it with the city, but it was NOT acknowledged.  Our city shelters were meant to be emergency shelters, but these days they are the only bed most of the homeless know. So when they are closed it causes panic amongst the homeless community.  If anything came out of this outbreak it was the City of Windsor learning just how hard it is to run a shelter.  The homeless consist of those with drug addictions, mental health, handicaps and even Youth.  Temporary measures were set up by the City of Windsor at several city owned properties and hotels.  Following Health Department direction, the homeless had to be separated by those who were tested positive, those who are now negative, or those who were not tested.  I will not devalue the amount of work this took, but the City had no idea of the potential disasters that laid ahead. You can not lock people up, (unless they are returning to Canada and put in Covid detention hotels) so the homeless still socialised outside with friends during the day.  One of the requirements to be housed temporarily by the City of Windsor,  was that you had to have had 2 negative Covid tests.  To enter Canada you only need one.  Many of the homeless did not know what to do.  There was no central command post to get information, they do not have access to computers in order to check their tests. The majority of homeless have only ever known the Salvation Army or the Windsor Downtown Mission as a place to go for information.   There was a lack of announcements and direction for them.

The worst part of the pandemic has been the negativity and lies regarding the homeless.  A recent article written by Anne Jarvis of Windsor Star said ”

Instead of breaking the chain of transmission and stamping out the COVID-19 outbreak among homeless people, some of whom are older and have compromised health, putting them at higher risk of severe illness and death, the Mission did the opposite. It replicated the conditions that led to the outbreak that has infected 90 homeless people and staff who care for them.

Not to mention potentially contributing to spread in the community.

I would like to address the “replicating the conditions that led to the outbreak”.  If the City hadn’t taken so long to approve the plans for the new Windsor Downtown Mission, maybe they would have had a larger area to work with.  Or, maybe the City should have had an emergency plan in place.  How was the hospital or the LTC homes “replicating the conditions that led to their many outbreaks”?  As for talking about the staff who care for the homeless, every service including grocery stores, LCBO,  could potentially get the virus and the staff at the Mission were no different. The Windsor Downtown Mission was able to hold off Covid at their facility for nearly a year. As for Anne Jarvis stating

“Instead of breaking the chain of transmission and stamping out the COVID-19 outbreak among homeless people, some of whom are older and have compromised health, putting them at higher risk of severe illness and death, the Mission did the opposite”  Severe illness and death??  Would they have been safer sleeping on the street?  Women who would be at risk for sex traffickers, or the mentally ill being robbed or beaten, the handicapped or youth would have been safe?   The first opening of the mission was during the big snowstorm.  I would like to know what her solution would have been.

Food for thought.  We do not have to have a negative Covid test to stay in a hotel, to go grocery shopping, to sit in a coffee shop or restaurant.  The homeless have every day hurdles just to survive on the street, but were virtually put through circus type steps to find a safe place to sleep.  And as this Windsor Star article wrote in their headline “Trodding from shelter to shelter in the middle of a Pandemic” it would appear that they were trying to relate to their dilemma.  Instead it was just another attack on the mission and the homeless.  In a previous blog post I spoke about Ron Dunn, the Director of the Windsor Downtown Mission having to set up an emergency shelter in light of a heavy snowstorm that hit Windsor

The continual finger pointing was reported in a Blackburn news article  The Windsor Commissioner of Community Development and Health Service Jelena Payne said:

“While we are supporting the response to the Mission’s outbreak, we share the belief of leading industry experts that housing is a basic human right, and shelters should be temporary solutions that focus on housing people as a priority. This belief is reflected in the recently adopted Emergency Shelter Review and ten-year Housing and Homelessness Master Plan,” said Windsor Commissioner of Community Development and Health Service Jelena Payne.”

In response to this comment, it has been 20 years since the Downtown Mission moved to the church on Victoria St.  It should not come as a surprise, that with the economy, loss of jobs, mental health cases increasing, drug addiction way up, that the Mission would see first hand, the growing crisis that was unfolding.   They provide food, shelter and many services which have grown exponentially.  Not enough money is ever given to help those with Drug Addiction or Mental Health, and then combine that with no affordable housing, and then a Pandemic.  Ron Dunn shared his concerns about over capacity under new stay at home orders in January of this year.  The Mission was given Covid funding to keep the church open during the day to accommodate those who were dealing with colder temperatures.  Extra security and staffing was needed.

Cover 19 has been especially devastating for the homeless as they had to deal with being alone or isolated.  Coffee shops and restaurants closed, which gave them nowhere to go to use a toilet, wash their hands or get a warm drink.   Overdoses have increased dramatically and hospitals are not even reporting the daily occurrences.  A study done in 2015 examined the impact of social isolation, loneliness, and living alone.  It revealed that

“Loneliness increased the rate of early death by 26 percent; social isolation led to an increased rate of mortality of 29 percent, and living alone by 32 percent.  “Loneliness is not just a feeling. It’s a biological warning signal to seek out other humans, much as hunger is a signal that leads a person to seek out food, or thirst is a signal to hunt for water.” 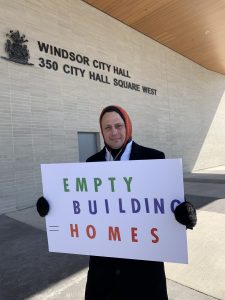 Tamara Kowalska, a local Homeless advocate spoke at a small (social distanced) protest on March 12, 2021 and was very right in saying “the Homeless are portrayed as villains but they are victims.  We need to remember that.  People experiencing homeless are victims. They are often unwell and traumatised and do not have access to the recovery they need”  Lisa Valente and Lisa Whitehead (Homeless Advocates) organised the protest and saw first hand what it was like for the homeless as they  walked with them to the Windsor International Aquatic and Training Centre to get Covid tests.  Many of these individuals were refused entry before to the Aquatic Centre and were not given alternative shelter and were forced to sleep outside. It was then, that Ron Dunn was contacted and he found a total of 35 who had nowhere else to go. To criticise a man who took these people in, because of the lack of a plan by the City is just not justifiable.

We as a community can not remain divisive.  We need to accept that this city is in crisis.  We need more affordable housing, and we also need a new home for the Windsor Downtown Mission.  The City and the media needs to stop dividing peoples opinion.  When Covid is over I recommend you take a tour of the Mission, you will see the hardworking staff, the dedicated Director Ron Dunn (who has not taken any days off during Covid) and the conditions of the church where the homeless go to eat.  There is a new Downtown Mission plan before the City.  Urge them to approve it and at least give the Homeless something to look forward to. 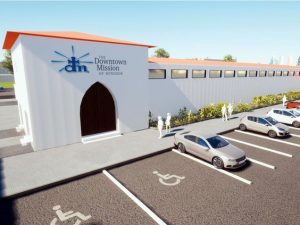